The countdown is almost over. Never mind the sleeps, there are only three more drop-offs to go until the summer holidays.

And while six weeks in each other’s company is not always the bliss I imagine, the relief of being released from the nagging, cajoling, comforting and threatening that is needed to drag the boys from their beds to the school gates on time each day is compensation enough.

It is only the knowledge that the term is almost over that prevents our already glacial journey grinding to a halt altogether.

Chief holiday cheerleader is Kit, five. Having finally woken, he opens both eyes and sits up.
“Is it the holidays yet?” he asks.

The answer, alas, sets off the first strop of the day.

Ignoring it, I get out his and Alec’s shirts which until a month or so ago had seemed white and rather smart but are suddenly grey, grubby and sporting a yellow sun cream tide around the neck. There is a brief locking of horns over who wears the Friday socks before a relatively civilised descent to the breakfast table where Harry, seven, is already eating his cornflakes.

While I fetch the Weetabix, Kit gets in a sneaky joke (in contravention of a Bomford HQ cardinal rule).

“Why did the cow cross the road?”

“Because it wants to go to the cinema?” asks Alec

“That’s what I said!” shouts Alec.

Harry intervenes to try to explain, but Alec cuts him off.

Sensing that the rules are up for renegotiation, Alec then starts to demonstrate the school’s Brazilian song that everyone has been learning for assembly. Rather than all sing together, Kit and Harry add their versions on top of Alec’s, each slightly out of time and, of course, tune.

Against this cacophony can be heard a little squeak. It is my voice. I go to the mirror and breathe on it to establish some proof of existence.

“Kit, you’re singing over me!” shrieks Alec, much to Kit’s amusement until he realises Harry is doing the same to him whereupon he shouts, “Stop Harry!,” before running from the room crying.

My husband sounds the 10 minute warning and the boys are herded upstairs to brush their teeth. I accompany them while he waits downstairs ready to slap on sun cream and shoes.

To say that the children respond to our order-barking would be an exaggeration. In fact, no one appears to have heard a word. The greater the urgency, it seems, the slower they become.

“Did you know that Minnie Mouse is a girl and Micky Mouse is a boy?” asks Kit between brushes, oblivious to the sound of pacing downstairs.

Alec has poked his toothbrush down the plughole and Harry is brushing his chin. My husband appears in the bathroom looking tense and ushers Kit towards the stairs.

There is a pause as my husband tries to remember previous ones in order to open Kit’s ‘barrier’ and get down the stairs.

“Please can I get past?”

“I don’t know. We really need to be putting shoes on now.”

I sense Kit’s barrier may get blown off its hinges shortly. Luckily Harry comes to the rescue.

“Click your fingers,” he shouts and my husband is allowed past. His tread sounds rather heavy on the stairs. 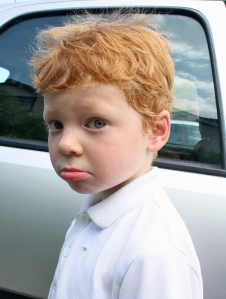 Kit is unimpressed by the demands of the school run

Alec is missing. I find him in his bedroom sorting out his Pokemon cards.

“I can’t find my best card,” he says wobbily. This is clearly a problem that can’t be hurried.

“One minute!” shouts my husband from below.

Thanking the lord for the fact that none of my sons is capable of finding anything located more than two centimeters from where they are searching, the card is quickly retrieved from under a nearby pile of World Cup stickers.

We rush down the stairs and I try to jam on Alec’s school shoes – not easy as one sole is flapping. The front door is already open and Harry is standing outside.

I finally get the shoes on and turn round.

“Actually, I think it’s more of a brick than a crystal,” he says, tossing it into the flowerbed.

Kit emerges from the kitchen clutching the packed lunches, prompting Alec to run crying into the dining room.

“It was my turn to carry the lunch bags,” he wails.

By now my husband is quite agitated. One minute is definitely up.

Kit is persuaded to give Alec the lunch bags and they head for the door, trying to trip each other up.

“OUT!” roars my husband, just as one of Harry’s classmates and his family walk past our front gate.

My husband hoists the school bags onto his shoulder and trudges off down the path. Squeals, laughter and the sound of a lunch bag being used as a football can be heard all along the road.

I close the door. Silence.

Only three more days to enjoy it.

Alec and Kit are sitting in the hall fighting over a Poundland catalogue.

The source of the argument is a picture of a family pack of fun-sized Crunchies. The boys jab at the image of the packet with increasing rage.

“I saw it first!” they shriek in unison, pulling opposite sides of the page.

Here I’m afraid Kofi Annan and I part company. After minimal negotiation the catalogue goes in the bin. The Crunchie dream has died. Having endured years of sanity-eroding bickering my patience over non life-threatening disputes has worn thin.

Seven years ago, as I pushed my adorable first baby around the park (and yes, it was probably sunny), I had no greater concern than which home made meal to defrost for his tea and where to stop for my latte. Motherhood really was a doddle. When I think of it now, the image is actually sepia.

Fortunately I had no idea then that within a few years my main role as a mother would be that of a human shield, a fragile and often ineffective barrier against the verbal and physical grenades my sons like to explode in each other’s faces. 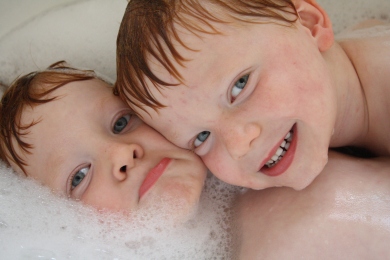 Kit may have lost this particular argument

I rapidly discovered that no possession is too small and no subject too trivial to spark tears, shouting and, usually, a good punch-up. Last week it even extended to unspoken thoughts.

When Kit asked my husband to get his bike out of the shed Harry, seven, exploded with rage.

The list of flash-points in our house is endless, but includes an epic struggle over who has the orange bowl at breakfast (a rota was instigated), a standoff whereby the twins would only sit in the left hand car seat (their seats were identical) and a nightly row over the angle of the bedroom door (too much light for Kit, too dark for Alec).

As toddlers Alec and Kit, five, fought over who would hold my right hand – both refusing to hold my left which was, of course, free. Whoever failed to get the right hand would then freeze on the spot and refuse to move until said left hand eventually swooped down on them and propelled them unwillingly up the pavement.

On World Book Day Alec and Kit were given the same books by their nursery. When we settled down to read them all hell broke loose. It turns out I was reading Alec’s version of Grumpy Cat so therefore Kit boycotted the reading. In the end Grumpy Cat (with whom I was starting to have quite a lot of sympathy), was read twice – once from each book.

Alec and Kit have developed a bedtime ritual of taking on the persona of a baby animal. Every night it’s a different animal, yet the conversation is pretty much the same.

“Awww! I wanted to be a baby tiger!” is the inevitable response from Alec.

“Fine – you be the baby tiger,” says Kit. “I’ll just be a piece of air.” And with that he turns dramatically to face the wall.

Constant bickering does funny things to the parental brain. Rather than refusing to be drawn into the boys’ whine-fest, I occasionally find myself capitulating to the most ludicrous demands simply so I don’t have to listen to another second of arguing. At my lowest point I once moved round our dining table at three minute intervals after an interminable row about who was going to sit next to me during the meal.

When Kit fell off the sofa recently Harry bandaged up his leg and pushed him around on a ride-on school bus which acted as his “wheelchair”. At story time, Harry sat with Kit and “explained” the plot to him.

“Mummy,” he said in a stage whisper. “We’re pretending – even though it’s actually true – that Kit doesn’t know anything.”

As if to prove his point, Kit smiled gratefully.

If there is the sound of a wail from the lounge, I can be fairly sure that by the time I get there Harry will be in another part of the room deeply engrossed in a crack in the wall. Once he tried a different approach. With Alec clutching a red mark on his cheek and Harry culpably near his victim he put his head in front of Alec’s hand and said brightly, “Right, now see if you can hit my head.” Unused to such an invitation, Alec stopped crying immediately and duly whacked Harry. That ploy was not repeated.

The one thing certain to unite the warring factions is an intervention from me. Driven to breaking point recently, I exploded through the lounge door and demanded that a cushion house game which had been dogged by fights, injuries and tears be abandoned once and for all.